Reflecting back on writing The Bullhearted Brand

Home / Thinking / Reflecting back on writing The Bullhearted Brand

It’s been a year since I published The Bullhearted Brand: Building Bullish Restaurant Brands That Charge Ahead of the Herd. As I reflect on that journey, I go through a series of good and bad emotions. Choosing to write a book is only one part of a more significant endeavor. An endeavor riddled with self-doubt, fear of the unknown, fear of rejection, and a rollercoaster of varying degrees of motivation and demotivation.

Outside looking in, folks tend to see only highlight reels. It’s why social media is arguably rotting away the tenets of a strong society, but that’s for another article at another time. People see the positives and it can look like writing is a cakewalk when, in reality, it’s anything but. Writing is ugly. It’s tough. Yet, it’s highly rewarding.

What kept me going through the tough times was the belief that I was simultaneously extracting my years of experience and expertise into written form, and endeavoring to help those who may not be financially equipped to hire an agency like Vigor. That mix of accomplishment and helpfulness served as fuel in the tank for me to push through the rough patches. And there were plenty of rough patches.

Truth be told, I started writing The Bullhearted Brand nearly 10 years ago when I moved from Pennsylvania to Atlanta in a highly out-of-character, epic change of pace. When I landed in Atlanta, I started to collect blog articles and emails I had composed over the years. My goal was to compile a helpful little publication that would answer the most common questions I came across in my career as a principal of a design and branding studio. The result was a small book titled, Fire It Up: Building Restaurant Brands That Blaze (no longer in publication.)

Fire It Up was my freshman attempt at writing something larger than an article. It was also my first go at self-publishing. I’m okay with the result generally speaking, but it was this lack of elation with the book that sparked my decision to rewrite it. Fire It Up was more “piss and vinegar” than I wanted. It wasn’t reflective of me or my brand. Instead, it was representative of a young man who had just watched his small studio go from promising to plummeting due to the negative effects of the economic fallout. Put simply, I was in a bad place mentally and emotionally, and the writing in Fire It Up showed it.

My displeasure with the tone of Fire It Up served as the spark to ignite the goal of a rewrite in 2017. However, once I started the planning process, I quickly realized that this new book could not be a simple edit and publish. I knew much more than I did back then. A lot more. And, as a result, the rewrite would essentially be a mix of absorbing bits and pieces of Fire It Up, sprinkles of previous articles I wrote, and a whole lot of extracting the knowledge that existed in my head.

I took the Branding Truths that served as the backbone of Fire It Up and edited them to be more aligned with my new knowledge and my experiences. I pulled the subject matter from a small brochure I created for Vigor, that used folktales and adages involving bulls as a metaphor. Then I mixed in my firsthand accounts, and my vast knowledge of restaurant branding, strategy, marketing, and creative. The resulting structure is what you will find in The Bullhearted Brand.

My energy and flow for writing the book were notably high at first. I trucked through chapter after chapter which added to my confidence. “This is easy!” I thought to myself. Then I fell victim to editing-while-writing (EWR).

EWR can be a motivation killer. Rather than pushing through a first draft, I found myself editing what I’d already written. Fine-tuning took over the effort to realize the draft and the result was discouragement, lost time, and eventually, putting the whole thing on pause. And thus The Bullhearted Brand stood for a few years.

I’m not quite sure what prompted me to pick up the writing process again, but in 2019 I did with renewed fervor and a clearer sense of what I wanted to accomplish. It was during this push that I found an outline that truly pulled a reader through the theory and details of restaurant branding and marketing.

I committed to not editing until I’ve finished the full draft. I committed to chopping away at the book’s content chapter by chapter, and not moving forward to another chapter until the one I had been working on was drafted. This proved to be a highly effective commitment for about 65% of the book’s content. At that point, I made a decision to inject first-hand experiences which shifted my process back to the beginning.

My first-hand experiences had to have a purpose. They had to deliver on a key takeaway that reinforced my point. So I aligned them with the bull stories and subject matter of a chapter. Lucky for me, they aligned quite well. So I added them to the outline and went back to work on the draft.

With about 20% of the book left to write, I hit a wall. I lost motivation. I started questioning why I was doing this at all. Was it even worth it? Who would buy it? Was it even good? These haunting negative thoughts sucked out my positive energy and left me floating for months.

Finally, I got fed up with indecision and lack of commitment. I told my team that I was taking two weeks off with little to no availability. I packed a bag and my little pup, and we drove from Atlanta to New Orleans to stay with my wife who was living there while working on a movie. At first, I found myself doing little writing at all. I was exploring the city and reconnecting with an old friend to the detriment of my goals. Then it happened…torrential downpours.

Massive storms rolled through preventing my extracurricular pursuits, forcing me to stay put and finally write the rest of the draft. In about five days, I had hit the big milestone of writing the draft of The Bullhearted Brand. And that’s when the real work started. 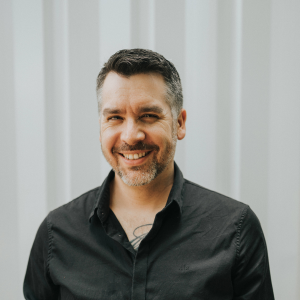 Subscribe to email newsletter to receive updates, tips, tricks, and other rad things of interest. We never sell your info so you’re secret identity is safe with us.

Bullhearted is a thinking repository and shop created by Joseph Szala, a multi-faceted brand strategist, designer, marketer, leader, author, podcaster, and more. Joseph’s passion is to instill bullhearted thinking into the minds and hearts of leaders in the creative, restaurant, beverage, food, and hospitality industries.

Now on Kickstarter! Help support the publication of The Bullhearted Brand!